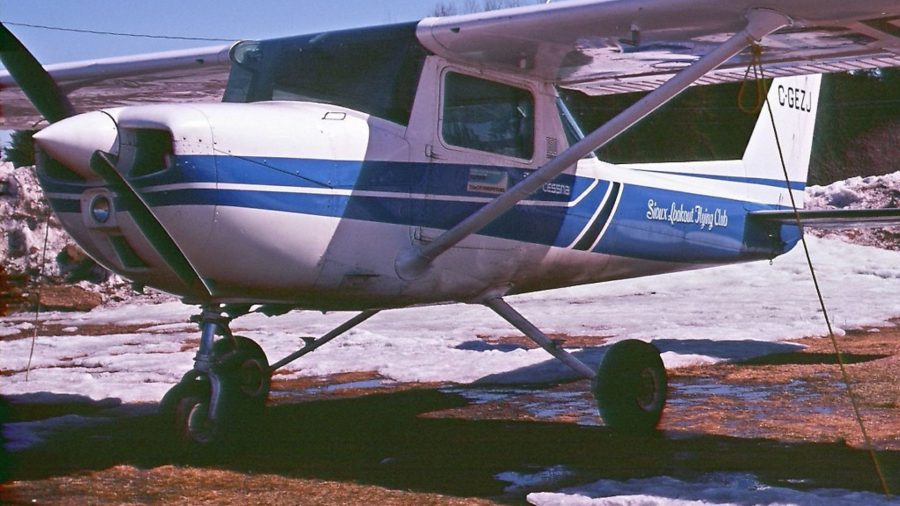 A cross-country qualifier almost finishes off one student pilot

In the early 1970s I was summoned to an appointment with the General Manager of the Debenhams store in Bromley, to sort out problems with the concession I manage. The only parking space available was marked General Manager. Quickly ushered into the GM’s first floor office, I saw a gentleman with his back to me wagging his finger at the car park beneath his window.

He turned around and introduced himself as Alan Bramson. I had no idea who he was beyond his GM title. He looked very military with a clipped moustache and short haircut. He spoke in curt tones, “Is that your car parked in my space?” Apologies were immediate. “No problem, I have always wanted to drive a car like that!”

Alan Bramson drove the car to a local eatery. In general conversation he learnt about my eagerness to fly and how I had failed the BEA full CPL bursary many years previously. He said that we were close to Biggin Hill, and a few minutes later we arrived at the now defunct King Air flying club, where three or four flying instructors lounged around. When Bramson appeared they all stood to attention and shook his hand.

I was mystified. Then to my amazement he asked if the new aerobatic Cessna 150 was available. Fifteen minutes later I was strapped into a harness for my first-ever flight in a GA aircraft.

I’ve never forgotten the next twenty minutes of flight with someone I had met only two hours before. He contacted Gatwick for information, requested me to re-tighten my harness, and next moment the sky appeared where the ground should be. Coins cascaded out of my pockets and hit me hard on the face.

Inside loops, outside loops, gun barrel rolls, inverted spinning, and a lot more! On landing I quickly exited the Cessna and tried to throw up. A voice from inside asked if I was sick. I gasped out no. “Shame”, came the reply. We marched back into the club and he introduced me to my flying instructor-to-be. He told us we were both mavericks and deserved each other. Wow!

Check out these other ILAFFT articles:

Fast forward ten months. I was preparing for my PPL qualifying cross-country flight in the under-powered Cessna 150. At this stage the Pitman Flight Briefing for Pilots, Vols 1-4, were the bible for PPL students. Co-authored by Alan ‘Bunny’ Bramson, FRAeS, Chairman of the Panel of Examiners, Honorary President of the Guild of Air Pilots and Air Navigators. I knew nothing about this for many years.

My cross-country flight plan was Biggin Hill to Stapleford and Ipswich (sadly now a housing project). The instructor said the weather for the trip will be “Gin clear, old boy”. I had an uneventful flight to Stapleford, rushed to the control tower, got my log book signed and continued to Ipswich.

Log book signed there, I got some bad news from the controller: the weather was drastically changing. Snow and snow flurries were forecast for London. Would I like to leave the Cessna and come back the following day?

The weather was still clear so I hurried the takeoff back to Biggin. Fifteen minutes later the Cessna was hit by heavy falling snow. The C of G changed significantly. The aircraft became sluggish. The remedy was to turn 180 degrees to get away from the snow back in the direction of Ipswich and blue skies.

I noticed the snow fell in a pyramid shape from the clouds, with gaps between the clouds. Banking the aircraft appeared to reduce the snow on the wings. My plan was to head back towards London, circling where necessary, and bypass the snow clouds. Due to drifting and circling I became completely lost.

The good news was fuel was around 70% full, enough to stay airborne for some time.The bad news was a darkening grey sky and constant light snow. The rudder and ailerons were free, the IAS appeared to be working, showing 90kt. Altitude was 1,600ft and VFR marginal. Hopefully I was heading approx 270.

The radio crackled but no response from Biggin. Randomly twiddling the radio knob I ended up chatting to an efficient female voice. By luck I was talking to an RAF station, not sure where. Explained my difficulties: student PPL and needed to find Biggin. She kindly advised me to contact Gatwick Radar with relevant info. Then the engine dropped a few revs. Carb heat on for a short period and the revs normalised.

Darkness was coming, visibility worsening but I was speaking to Gatwick Radar. Repeated my problem. Once they had my info they asked me to turn left then right, confirmed they had contact and vectored me to Biggin. If that failed I was to reconnect to be vectored to Gatwick. A warning that min 1,500ft AMSL must be maintained, and due to Biggin’s elevation of 620ft, the snowfall there may be more intense…

Biggin came crackling over the radio. Please advise ETA, location, altitude and heading. QFE was given. My preference was QNH. My reply was “Standby one”. Next moment a worried instructor came on the radio and announced he was coming up to find me. In these snowy conditions? No way! In addition I’d fail my exam.

The snow was thicker now. A bit later I looked down and saw Biggin’s large Runway 29 in the snow.

A miracle of vectoring and luck! But it appeared I was halfway down the runway and my altitude must have been 900ft or more. I needed to lose excess altitude fast. No way was I letting the runway out of my sight. Immediate action was needed.

I’d previously enjoyed many successful side-slipping practices with my brilliant instructor who taught me this technique for short field landings. It was always a lot of fun. Full left rudder, full right aileron. I came down onto the runway too fast, probably 80kt, resulting in a high initial bounce. Two bounces later, a landing of sorts. I did not care. Applied full brakes which were useless in snow. I had even forgotten to put on carb heat. Finally slid to a halt.

Only then did the full extent of the return flight hit me.

The radio crackled. Biggin Tower: “Golf-Echo Bravo give me your position, altitude and heading.” “Biggin Tower, this is Golf-Echo Bravo. I have landed on Runway 29.” The snow was now falling heavily. Tower: “Please confirm, we can’t see you.”

Landing was confirmed to an incredulous controller. “Taxying to club house.” Over and out. Opening the door I found the place packed with flying people who had stayed on listening on the radio to the drama of a PPL student lost in the snow. The expected applause and free drink never happened; only smiles from people who seemed embarrassed that I had somehow caught them listening.

My instructor was not smiling. Why did I not heed the advice of Ipswich Tower? Any number of people could have been hurt; you could have been killed. What were you thinking? I changed tack. Discussed my conversation with Gatwick Radar. Thanked him for the slide-slipping technique which saved my day.

The gruff response was “You have passed”. I never flew from Biggin again in an aircraft that did not have a VOR.