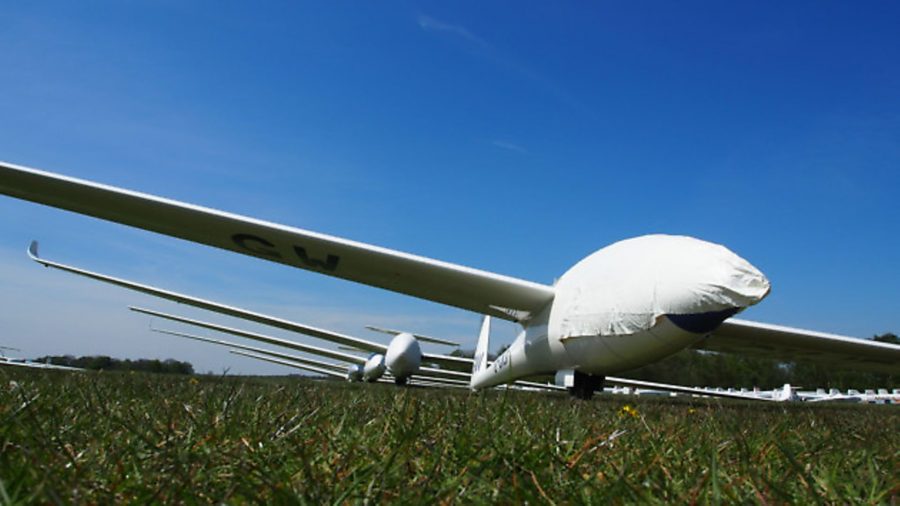 Gliding is a true sport and when the competition bug bites, the only way is up! Pilot joins the BGA Club Class team on a training day at Lasham

It’s a hot and sunny day as I head to Lasham Airfield ? perfect for photographers, but sadly not for gliders. The entire airfield is owned by Lasham Gliding Society, the biggest gliding club in Europe with over 200 aircraft, and they have a great setup where they receive rent from the resident jet company and film studios.

My guide for today is ‘G’ Dale, British Gliding Association Club Class team member and professional gliding coach. He works at Lasham, but he teaches mountain flying in places like France and New Zealand, where he has just been asked to train coaches.

On top of this, he has somehow found the time to write the first of three books – The Soaring Engine. Now 57, G has been fascinated by gliding from a young age: “When I was thirteen, I changed schools and had to wait for the bus outside a library. I worked my way through the science fiction section, then on to transport?motorbikes and cars, that sort of thing. Then I found a book on gliding by Philip Wills and…” He mimes being caught on a fishhook.

The day starts at 8am with the team rigging the aircraft. The wing spars slot into a box behind the cockpit and mesh to form a rigid joint. A pin is then slid through the middle to secure them.

In order to reduce drag, every gap in the fuselage is taped over. Unfortunately, the adhesive from the previous day’s flight remains on the aircraft so one of the first jobs of the day is to clean it off with a cloth and white spirit. Then fresh tape is applied.

“Most of the aircraft competing in the Club Class are vintage,” says G. “This one was built in 1970,” he says of his Glasflügel Libelle, fitted with modified fairings. Originally designed as a Standard Class glider, the Libelle is manufactured from GRP, has a maximum speed of just shy of 140kt and a glide ratio of 38:1.

Inside, the cockpit has far more electronic equipment than most gliders. Alongside the altimeter, airspeed indicator, variometer, compass and artificial horizon are two computers. These deal with vertical navigation (movement up and down, the distance one can glide at a certain speed with a certain wind etc) and horizontal navigation (a map!).

The aircraft are also fitted with FLARM collision course detectors. These use GPS to monitor the position of other gliders and let you know if one is converging with your aircraft. However, this safety device now means that in races everyone can see where their opponents are, so routes become more crowded.

The Club Class team usually flies in two or three competitions a year. They competed in the National Club Class Championships in Yorkshire, with G finishing in second place, and will be heading to Lithuania for this year’s world championships.

The 2016 Club Class team is made up of G, Will Ellis (32) and Tom Arscott (23). Normally teams consist of two members, but Tom won the Junior World Championships in Australia and has been invited along as a ‘wildcard’ entry.

Also at training today is Rich Hood who, along with his brother Jez, flies in the Standard Class team. We are joined by team manager Graham Garnett, and Hugh, who often crews for G.

“Gliding’s largely amateur, so it’s normally people at whatever stage of their lives wrestling with time, money and family,” says G. “The closest flying sport, in terms of the dedication that goes into it, is aerobatics.”

The cheaper way to race

Club Class covers aircraft with a 15-metre wingspan. It is the cheaper way to race, with aircraft costing in the region of £10,000 (while a Standard Class glider can be worth five times as much).

Put simply, competitors are assigned a route to fly around. The fastest is awarded 1,000 points, and the rest receive a percentage depending on how much slower they are to finish. Additionally, aircraft are given a handicap rating, which takes into account numerous factors, including weight and performance. So the fastest pilot may not necessarily be placed first.

Competitions take place over a week or two, and the winner is the person who amassed the most points. Those competing at a European level need to have achieved a podium place in a national championship. World championship teams are chosen by a vote, and can include winners from junior or women’s championships as additional wildcards.

“Gliding is all about probability,” G explains as we walk to the clubhouse for a briefing. “For example, you might look at a cloud and think ‘it looks like there might be a thermal there’ but it isn’t certain. You might get there and find there isn’t one.” This, he explains, is why gliders in competitions tend to fly together. It means pilots can see when someone else has found an area of lift and take advantage of it.

“Gliders fly faster in groups. If you come across another glider you may fly together for speed, just like cyclists ride together in the Tour de France.”

Communication between pilot team members is essential. They can let each other know if they find areas of lift or sink, and warn of impending weather. The pilots have to be able to trust each other and develop a style for working together.

Once the gliders have been safely transported to the ‘grid’ (gliders ranged at the launch point), we head to the clubhouse for a briefing. A club member takes us through the latest weather forecasts and Met Office reports. When the room has cleared, the team prepares for its own meeting. Whilst we wait for them to collect spot tracers (GPS trackers), I chat to Will about his introduction to gliding.

“When I was in the sixth form and looking for any excuse not to revise for my A Levels, my headmistress told us about some talks by the Royal Aeronautical Society. I went to them and decided I wanted to glide, but I couldn’t afford to,” he says. “I waited until I started work and saved up every penny I had to learn to fly. I got into gliding through the poor man’s route. I got a £320 fixed price to solo, then I bought a glider for £6,000 and worked my way up from there.”

Yesterday’s routes, recorded by the trackers, are projected onto a whiteboard along with details such as airspeed and altitude. The day before, the team encountered bad weather and both G and Will had landed out.

So the group spends much of the session analysing each point of their routes, both in terms of decisions made and communication between them. Exercises like this are incredibly useful for learning, as they illustrate how different pilots operate in the same piece of sky and which one achieves the best results.

There is a lot of discussion on how to use thermals to their full advantage, when to move on, and how to get the most out of different rates of climb. G explains, with the aid of a diagram, that a six-knot thermal won’t buy you much more time than a five-knot one. In this case, knots refers to the rate of climb.

They also discuss the use of the ‘street’, a line of thermals following the direction of the wind. If a pilot finds a thermal, he or she can view wind direction from computers in their cockpit and follow the street to gain height, before flying off along their original line.

Rich, an experienced competition pilot, gives a short talk about coping with flying ‘into the blue’. A clear blue sky gives no indication of where thermals might be. Therefore, the tactic is to spread out in order to increase the chance of one team member coming across a thermal and alerting the others. “You need to be sharper on the calls,” he says.

Conditions today don’t look promising, and so the plan is to fly a short route between Alton, Popham and Basingstoke. The team will fly it a number of times and then meet up afterwards to discuss any lesson learned.

Outside, we sit amid the gliders on the grid and wait for the thermals to improve enough to launch. A few hardy souls have gone up, and we watch them struggle to gain height. G indicates the blue skies and warm sunshine and jokes, “We’re the only people in the country complaining about the terrible English weather.”

Someone points out the tufts of wool and plastic surface stuck to the outside of Will’s cockpit and asks what they’re for. He explains, in layman’s terms, that gliders are designed to keep air the flowing around them ? this is why fairings are included to improve aerodynamics. If air is caught in a pocket, it becomes ‘dead air’ and holds up the flow. Will has improvised a vane to eliminate one such problem with his Hornet glider, the wool tufts acting as flow indicator.

Eventually it looks as if the airborne gliders have found thermals and are gaining height and the decision is made to launch the grid. The two tugs come to life and we begin to launch, directed by team manager Graham. A pilot with a two-seater, Tim, kindly gives me a ride so that I can photograph the team in the air.

Conditions are difficult ? there are few thermals and those we find give little lift. We can hear the team talking to each other over the radio, providing details of the rate of lift that they have encountered.

After an hour of trying to find thermals and with no improvement in the weather, the decision is taken to head back to the airfield. “It’s good to practice together in difficult conditions,” says Will, as they plan next week’s training. They have just a few more weeks left until the Club Class Nationals at Pocklington ? the first time they will fly in competition together.

As we head off, I ask G why he started competition gliding. “I’m just wired that way,” he says.

“Most of the people who do it are wired that way. When I was a kid I did piano competitions. Not to beat everyone else, but to measure my own success. The same goes for gliding. Competing allows you to compare your own skill against other gliders. You’re not competing against other people, you’re competing against yourself. You’re trying to be the best you can be.”