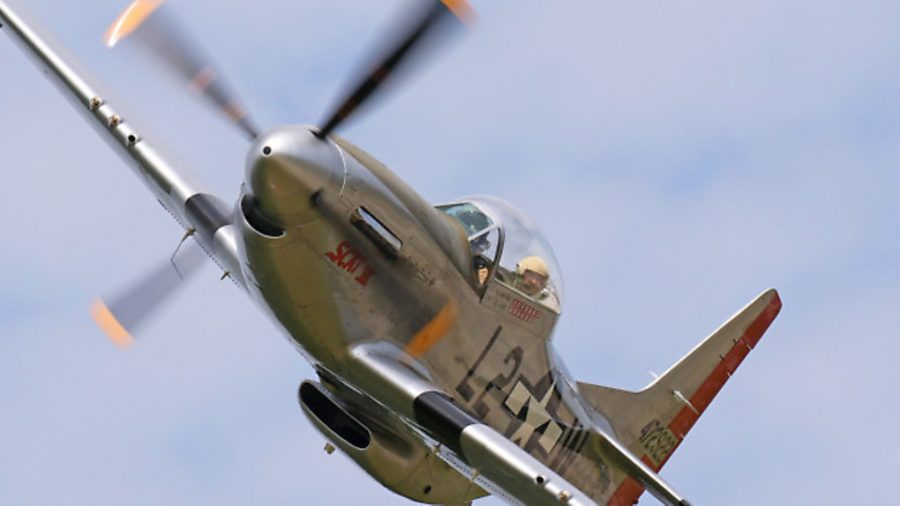 A visit to Belgium to see Robin Olds’ historic machine and meet the famous fighter pilot’s daughter, before returning by air to fly the aircraft – an experience you too can enjoy!

Try and imagine how you would feel if, completely out of the blue, you got a call asking if you would like to go and fly your favourite World War II aircraft of all time. Not only that – your most revered WWII pilot’s own personal aircraft, Bob Stanford Tuck’s Spitfire? Guy Gibson’s Lancaster? Or even Adolf Galland’s Bf109? What a totally ridiculous dream?pie in the sky.

Well, it happened to me. A chap with a Belgian accent rang me saying he operated Robin Olds’ personal Mustang and Olds’ daughter would be flying in from the USA, so I should write a story about it. But before you start cursing the name of Davy, let me explain that the P-51 Mustang in question is now a fully converted, dual-control TF-51 trainer based in Belgium, and you can fly it too.

Named Scat VII, the aircraft is run as part of a non profit-making organisation in Antwerp and is available to fly for a very attractive price – not much more than you would pay in the USA, where warbird operating costs are much lower than they are in Europe.

Anyway, a couple of weeks later I was jumping in my car, driving down to the Channel Tunnel and completing the 300 or so miles to a restaurant in the beautiful city of Ghent. There I met Lieven Lavaert, an airline pilot who helps to run the Vintage Dream Factory where the Mustang is operated, and had just under fifty hours on Scat VII. With him was Christina Olds, Robin’s daughter from his marriage to Ella Raines, a famous Hollywood movie star of the 1940s and 50s.

Christina and her father were extremely close. After he died in 2007, she completed the autobiography he had researched and collated, but had never been able to finish, and she has toured all over the USA and Europe, talking about his life and how his leadership and progressive military thinking continue to influence successive generations of fighter pilots. Today, the elite 8th Fighter Wing ‘Wolf Pack’ air combat unit Robin Olds set up nearly sixty years ago is deployed in South Korea, defending the region from North Korea.

The following day, I came face to face with Scat VII at Antwerp airport. That first sight in its hangar set the hairs standing on the back of my neck and arms. There was a primal fear mixed in with awe – the eleven kills along the left rim of the canopy and six fifty-calibre weapons in the wings reminded this most beautiful of aircraft was first and foremost a killing machine. Olds scored his last four victories in Scat VII.

Scat VII was built in 1944 by North American Aviation under construction number 122-39381 and was delivered to the USAAF the same year with tail number 44-72922. It served with the 434th Fighter Squadron, 479th Fighter Group as Major Robin Olds’ personal aircraft.

Like so many surviving high-performance aircraft of the period, the Mustang has been involved in several major scrapes. In 1993 and again in 2006, it was given a ground-up restoration in the classic American style (replace rather than rebuild), so you do wonder how much of the original aircraft is still extant. One thing for sure is it’s probably in better shape now than when it was first built in 1944.

The cockpit floor is one example of the aircraft’s authenticity. Made of wood, it saved valuable metal in production (metal that if scuffed could be a fire hazard if petrol was washing around underfoot, as did sometimes happen in combat). The cockpit even has the original oxygen regulator fitted on the right wall and only a modern GPS navcom box on the left of the instrument panel lets you know it’s 2016, not 1944.

One thing foremost in my mind every time I walk around a P-51 is how it looks so far ahead of anything else of its time. The finely-sculpted carburettor ‘chin’ under the spinner would be the jet engine intake of North American’s first jet fighter, the F-86, just a few years later. When the Mustang flew in combat, the jet age was just around the corner.

Climb into the cockpit of a Spitfire and details like the fretted hands of the turn and slip gauge (looking like grandad’s clock) tell you you’re in the 1930s, whereas the P-51’s cockpit feels relatively modern.

At one point Christina insisted I put on her father’s combat jacket for a picture. I was absolutely blown away to be wearing it in front of his actual aircraft – and it sort of fitted (my shoulders were unsurprisingly not quite as broad as Robin’s!) Then Lieven and Christine taxied out for their trip to a nearby military air base for a major event to ‘launch’ the Scat VII operation in Belgium. I watched in admiration as it took off, knowing my turn would come.

“My father loved this P-51 and it remained his favourite aircraft of his thirty-year US Air Force career,” says Christina. “When Scat VII was first restored in 1993, he was able to fly it again. Photographs of that day show a very happy 71-year-old boy! I am pleased to support the Vintage Dream Factory in all their efforts to maintain and fly this wonderful piece of living history.”

Back for my turn…

Part two of this great Mustang adventure started in the first week of June. My good friends Tom McCormack and Tom Lambert offered to fly me out with another pilot mate keen to get some stick time in Scat VII. While I went through P-51 pilots’ notes, checklists and drills plucked from the Stallion 51 course, the two Toms navigated round the south of the Heathrow TMA on the 200-mile hop to Antwerp. I’m glad I had time to revise as I was soon to be grilled on the subject.

One and a half hours later and we were setting down on Antwerp’s runway. Instead of clearing customs, we were beckoned directly across to the FBO, which looks after the Dream Factory’s customers as well as hangaring Scat VII. Instructor Frederic Vormezeele was soon introducing himself and we set about planning the two flights.

The training in Scat VII is modelled on that for the world’s most long-lived and respected Mustang operation, Stallion 51 in Kissimmee, Florida. If you have graduated from Stallion, you could be eligible to take front seat of Scat VII. Otherwise you will start in the back.

Before flying, expect a thorough check of your background and experience ? if you can show a few hours in a T-6 or equivalent and solo standard in a Pitts S-2 (both available at airfields like White Waltham) then you shouldn’t have much of a hill to climb with Scat VII.

Frederic first checked out my technical knowledge, which initially wasn’t up to scratch! After the shaky start, I managed to come out with enough right answers to permit me to fly from the front cockpit. No one should be disheartened to fly from the back at the beginning ? the two cockpits are virtually identical and only the engine starting system, fuel selection and a few ancillaries are confined to the front.

At first, I had actually found the Mustang easier to land from the rear cockpit due to there being more ‘seat-of-the pants’ cues during the flare, whereas from the front you sit higher and are positioned on the C of G.

Just like the fighter jocks of yore, I climbed onto the wing via the left main wheel tyre and then straight over the cockpit wall into the front seat. Everything was immaculately clean and yet I could still smell the familiar warbird aroma as I strapped in.

The Mustang is quite a straightforward aircraft to operate and I didn’t have any problems remembering how to get the engine started and bring the systems on to line, taking care not to over-prime, of course, as I’m sure you’ve all seen what a carb fire in a Merlin looks like.

Taxying isn’t easy because of that unfeasibly long nose and I was extremely careful as we manoeuvred out to the holding point, keeping the tailwheel lock in with aft stick for all but the tightest of turns, and at one point handing control to Frederic while I programmed the GPS for a local airfield we would transit for some circuits.

This airfield turned out to be the infamous Sint Truiden, a Belgian military aerodrome captured by the Germans in 1940 and used as a Messerschmitt 109 and Stuka base during the Battle of Britain, a bomber base during the Blitz and defensive Focke Wulf 190 base in the closing stages of the war.

It was regular practice for P-47 and P-51 fighters escorting our bombers to strafe Sint Truiden on the way over and I couldn’t help wondering if Scat VII had seen any action there in the hands of Robin Olds.

I take back control (keying in that GPS ‘direct to’ took me far too long), carefully check the approach and line up on the hard runway, running forwards a few feet with the stick now hard back to ensure that the tailwheel has locked. After a quick health check of the Merlin at a low power setting, I advance the throttle smoothly while keeping the nose exactly straight with right rudder (we preset six degrees right rudder trim to help matters).

But not all the way on the throttle ? first to a slightly deafening 46 inches manifold pressure then up to an ear-splitting 55 inches as we pass fifty knots, the tail feeling as if it is being blown upwards by the prop wash as I push the stick forwards to the desired ‘tail-down wheeler’ attitude.

At the same time I am feeding in more right rudder to counter everything trying to take me off the left side of the runway: the P effect of the propeller ? the precession of that enormous gyroscope as it is tilted forward; even the extra drag on the left tyre as it is driven hard into the runway by the torque of 27 litres of Merlin up front. Oh, and a crosswind from the left!

At little over ninety knots she is ready to fly ? a deft pull on the stick and she is off cleanly.

I reach down the left cockpit wall, lift the undercarriage lever outward and up, then pull the power back to 46 inches and reduce the revs by 300 to 2,700 rpm for the climb. No time to waste, we need to start a turn to the right to avoid overflying the city and instead follow Antwerp’s version of the M25 as the safest course above the urban sprawl beneath us.

The controls are firm but responsive, the aircraft stable but bidable, control harmony perfect. At 2,000 feet we level off, the ASI nudging 250kt without trying, and I’m settling down, at home again in the best aircraft I have ever flown.

The intensity of the flying meant I didn’t have time to think too much about my hero Robin Olds or the significance of doing circuits at a WWII Luftwaffe fighter base until well into the flight home to England in the two Toms’ Cherokee 6. Only then did it fully hit me that I had just had one of the best flying days of my life.

The boys from Belgium really have made flight training in a Mustang accessible to pilots in Europe. The basic price is €3,000, plus VAT, per hour. Packages for joy-rides start at €2,200 all in. Check out Vintage Dream Factory at Vintage Flights.

Reflections on the Battle of Britain