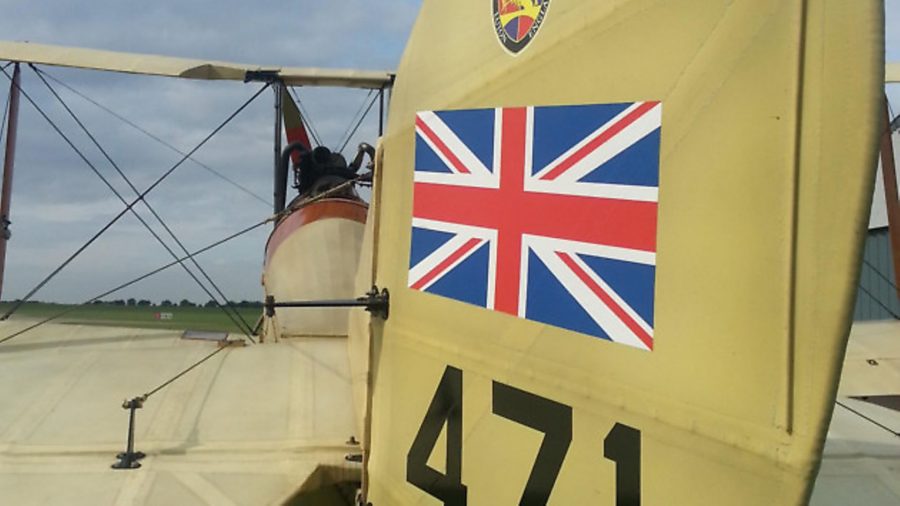 On 13 August 1914, twelve BE2 observation aircraft of No.2 Squadron Royal Flying Corps flew from Swingate Down near Dover to Amiens in France in support of the British Expeditionary Force.

It was the first aerial deployment of an air force to a theatre of action. The feat, in terms of airmanship, was unprecedented. In the years after Louis Bleriot’s faltering first crossing, only fifty or so pilots had flown the Channel, yet all twelve of the No.2 Squadron aircraft made the crossing and in the opening weeks of the Great War, more than 60 of the frail aircraft successfully made landfall in France.

It is recorded that Lieutenant Hubert Harvey-Kelly was the first to land, in breach of an order from his Commanding Officer, Major Charles Burke, that “all aeroplanes were to take off and land in Squadron order.”It was assumed that Harvey-Kelly’s mount had been a BE-2 with the tail code ‘347’. The assumption was based on a photograph, still held by the Imperial War Museum, which shows Harvey-Kelly reclining against a haystack next to his aircraft.

“As we have been preparing our aircraft to cross the Channel in commemoration of that first flight, we have been liaising closely with the Western Front Association and its vice-President Graham Parker” says Stephen Slater, co-owner of the ‘Biggles Biplane’, an authentic replica of a 1914 BE2 originally built in the 1960s for a Biggles film . “One day he said he had an interesting document for us to see”.

It turned out to be a faded, typewritten copy of Major Burke’s diary for the day of the crossing. In addition to giving a first-hand account of the crossing, the diary page contained a list of each aircraft and the pilot flying it.

“It was a bitter-sweet moment for us” said Slater. “On one hand we had uncovered a piece of history and now knew definitively the correct number. The bad news was, that having flown as ‘347’ for the past three years since we restored our aircraft, we now had to completely remake the rudder with a new fabric covering painted with the correct code.”

Next week, correctly coded ‘471’ the BE2 replica will, as Steve says “once again fly into history in commemoration of the brave aviators of a century ago”.