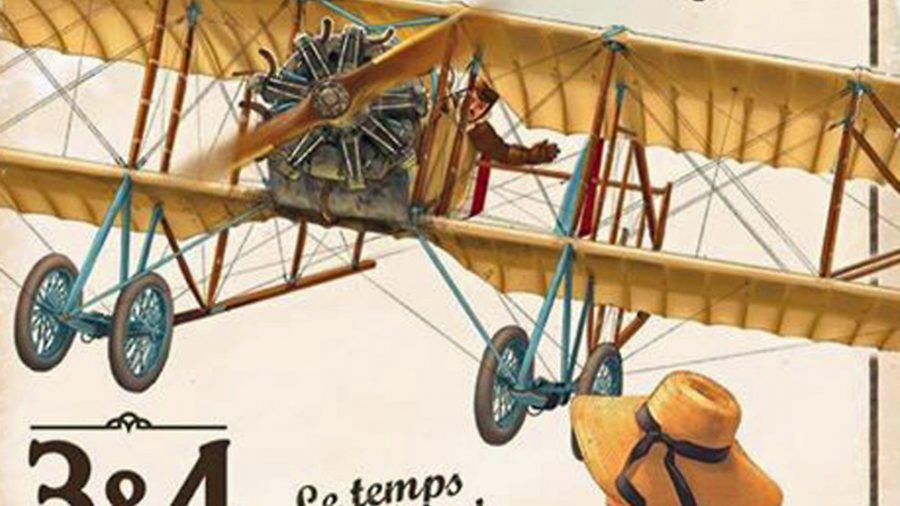 The 45th annual gathering hosted by the Amicale Jean-Baptiste Salis (AJBS) on 3-4 June lived up to the high expectations of the large crowd, with over 100 aircraft in the flying display and nearly as many lined up on the ground. Words and photos by Peter R March.

There can be little doubt that the Meeting Aérien ‘Le Temps des hélices’ held on the French Pentecostal holiday weekend at the Aerodrome de Cerny – La Ferté Alais south of Paris, is one of Europe’s finest airshows.

Where else could you see so many examples of the earliest flying machines, WWI and WWII combat aircraft, civilian types from the past ninety years, right through to current commercial airliners and military front-line aircraft?

While the weather was not kind on the opening day with flying curtailed by a heavy storm, Sunday provided ideal conditions with light winds and bright skies for the full cavalcade to take to the air.

While accustomed to seeing the Blériot XI-2 ‘Pegoud’ and Morane H flying together, the appearance of the Deperdussin T replica with them for the first time since 2008 was welcome. The AJBS Caudron GIII and Albatros C2, the Memorial Flight Association’s Spad XIII, Les Casques de Cuir’s TVAL-built Bristol F2B and the big Breguet XIV, together with various RAF SE5a replicas, represented the WWI period admirably. The Breguet replica F-POST built that first flew in Toulouse on 11 November 2003 after eleven years’ construction, was making a rare visit to La Ferté Alais.

There was a distinctly new feel to the ‘years between the wars’ with Stearman wing-walking, Bücker Jungmann, Stinson Reliant, Laird Speedwing and visiting Ryan SCW in the air. This was the first time that Australian Steve Carter has been able to participate in a flying display as under French rules he does not need to have a national display authorisation.

WWII was portrayed in fine style as always with the Luftwaffe-painted Storch and Ju-52 respectively surveying the Russian battlefield and dropping parachutists. Both aircraft were ‘taken out’ by a quartet of Yaks that included Will Greenwood in his Yak 3UA G-OLEG. With only one AT-6/Zero replica available the very effective Tora! Tora! Tora! attack comprised a colourful ‘armada’ of Texans and Harvards with a solitary P-40N Warhawk defending the base.

The Fighter Collection sent two of its aircraft to the show — Gloster Gladiator and Curtiss Hawk. Unfortunately the Gladiator had an engine problem en route from Duxford and despite the efforts of TFC’s engineers could only complete a brief circuit on Saturday morning before returning to the hangar. The Hawk gave a very nice display on the first day before departing for another engagement in Holland.

Under the programme title ‘Warbirds Legende’ three iconic WWII fighters took to the air. Christophe Jacquard’s Dijon-Darois-based PR XIX PS890, recently fitted with re-sparred wings, represented the Spitfire. It was partnered by Hurricane IIa P3351, owned by Jan Friso Roozen and based at Cannes since it was imported from New Zealand in January 2013. The locally based P-51 Mustang Nooky Booky IV gave a spirited solo performance.

There were two special formations in the flying display. ‘La Saga des Caps’ saw a flypast of thirteen Caps (10, 20, 21, 222, 231, 232, 332 and 432) as a tribute to Auguste Mudry designer of the Cap 10 and ‘l’Escadrille du Souvenir’ flew five Piper Cub variants to mark Jean Salis’s 80th birthday. Its involvement lower key this year, the French Navy provided a Breguet Atlantic that arrived with a rare Fouga Zephyr (navalised Magister) and a pair of Alcyons.

The ever popular appearance of Christophe Jacquard’s Sea Fury F-AZXJ accompanied by the Swiss Hunter T68 HB-RVR heralded outstanding duo and solo displays. When they were joined by the brightly painted French Air Force Rafale the heritage formation presented ‘three generations of fighters’. There was another opportunity for the AJBS pyrotechnic team to demonstrate their explosive skills in the ‘Good Morning Vietnam’ sequence involving two Skyraiders and a T-28A Fennec.

The return of Air France to La Ferté Alais some thirty years after the airline first participated with Concorde accompanied by the Patrouille de France, was a highlight of the Sunday afternoon. This year the PAF’s eight Alpha Jets escorted an Air France Boeing 777-300.

As usual the lines of aircraft on static display and the nearby hangars had a number of historic aircraft and non-flying replicas that were new to the event or were unable to make it into the flying programme for various reasons. These included the Memorial Flight Association’s Fokker D.VII and Sopwith 11/2 Strutter, a Fokker EIII locally built by Hubert Mars, a ‘new’ Sopwith Pup replica that arrived with a Nieuport replica from Villerupt and Argenteuil Retroplanes’ Donnet Leveque amphibian (F-AZXB) on show to the public for the first time.

However, catching the attention of visitors because of its strange shape and bright red paint scheme, the replica of Henri Coanda’s 1910 aircraft had been brought to the show from Craiova, Romania where it had been built by ARPIA over three years from October 2009. Coanda’s original ‘turbine’ aircraft was exhibited at the second Paris Salon in 1910.

Accompanying the Coanda at La Ferté Alais was another ARPIA replica — Traian Vuia’s No 1 aeroplane. On 18 March 1906 he flew his steam powered machine a distance of 12m at a height of 1m at Montesson near Paris. The replica was built in 2015 in Craiova.

To complete their ‘vintage day’ at La Ferté Alais, visitors wanting to take to the air had an appropriate choice of aircraft to fly over the local area: Swiss Ju52, German DH Dove and home based Travel Air 4000, Stearman, Texan and T-28 Trojan, as well as several helicopters. This is the show not to be missed. The next Meeting Aérien is on 19-20 May 2018. www.ajbs.fr