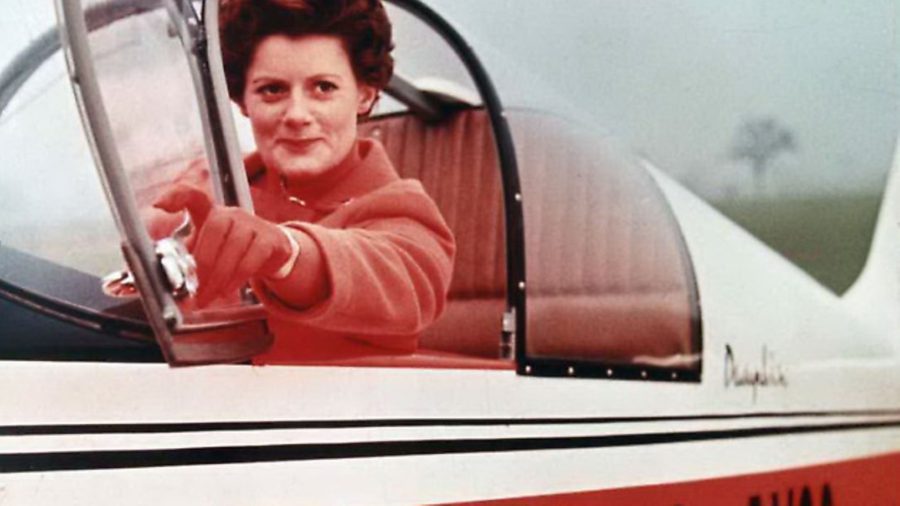 Still flying at an age when many pilots would have thrown in the towel, we chat to Headcorn’s lady founder Diana Patten, about her undying love for aviation.

The Cessna rolls across Headcorn’s grass strip and leaps into the air, soaring over our heads and the cameraman grins at me, “what a shot!” The pilot and founder of the airfield, 81 year-old Diana Patten, is as much an expert at creating a stir as she is at flying an aeroplane.

The BBC London team are here to talk to her about the publication of her biography, Redhead in the Clouds and I wait until they have finished filming her sitting in the late October sunshine, before we retire to Headcorn’s cosy café. As we sit, her granddaughters ? both of whom have inherited the family’s love of aviation ? excitedly show me photographs of a traffic jam that they flew over while on a flight with their father, Jamie.

By today’s standards Diana’s childhood was highly unusual, “but in those days it wasn’t,” she says. “I grew up with my grandparents mostly, in a beautiful house on Hampstead Heath. We owned part of the Heath. As a child I was lucky enough to meet Queen Mary, and when I was seventeen I was presented at Court. I had a very lovely childhood, a very strict upbringing. And also because of my father’s flying he built me a model aircraft, which we used to fly.”

It was her father Desmond Naismith, a test pilot and engineer, and his sister Paddy, one of the first female pilots, who inspired Diana’s interest in aviation. A self-styled ‘tomboy’, Diana was also “mad on cars”, and her first was an Austin 7 Special which she built herself. A lover of speed, she got involved with racing and once set the fastest time of the day at the Brighton Speed Trials in her uncle’s Claremont. As a young woman she would also help grind in valves and balance con rods for Colin Chapman of Lotus fame, and even rode in the safety car on Lotus test drives. To this day she “won’t drive a car unless it’s fast”.

It was after she moved to Canada at the age of seventeen that Diana first learned to fly. “I got my Canadian licence at Central Airways with the Wong Brothers,” she says. “I was actually going to live and work in Canada, but I came back to sort a few things out and met Chris [Freeman], and we decided to get married. I had a contract to teach with the University of Toronto for three years, but reading the small print, which my boss who was a very eminent paediatric neurologist told me to read, I found out if I was getting married I could renege on my contract. So I told them that I was getting married, and had to prove it, and then I came back”.

“His family owned this farm, Headcorn, which was an airstrip during the war. I decided that I wanted to keep my flying current, so I bought an Auster 5; G-AJGJ. Then I bought Auster ‘Echo India’ for Chris. It was in bits and we rebuilt it in one of the hangars that used to be the tractor shed. Chris did the engine and I did the airframe. I’ve owned two aircraft – the Auster and a Dauphin, G-AVOC. The one we flew today was WJ: Chris and Jamie had it rebuilt and it looks beautiful. It flies extremely well.”

In its early days Headcorn was an unlicensed airfield and therefore the number of movements that it could have in a year was restricted. The only visitors were Diana and the odd friend. Originally she based her Auster at Rochester, but decided to move it to her home airfield after it started to get hangar rash. Diana and Chris built a hangar that remains on the airfield to this day. “It was just for my aircraft,” she says, “with straw bales in the middle and sheep at one end ? no health and safety then!”

Gradually more and more people wanted to fly in and the airfield’s popularity grew. “We used to have fly-in breakfasts, which I would cook. I started a canteen with an old gas stove and an old sink. I used to have the pilots at the house, but it got too much, so we decided to move it down the road, through the contacts that we had, we used to get some very well-known aerobatic pilots flying in: James Black, Ray Hanna and Neville Browning.”

Anywhere that the couple could fly to, they did. Diana even used to take the aircraft to Berck-Sur-Mer to shop for groceries. Later she bought a Dauphin at Dijon in a white and tangerine colour scheme, which the company liked so much that it began to offer it as a standard option for customers. Ever mindful of the press’s interest, she had a summer and winter suit made to match so that she’d always look smart if someone took her photograph after landing.

In 1964, Diana had the opportunity to head further afield. “A friend of ours, Patrick, was in the Army Air Corps. He flew in here quite a lot with their Tri-Pacer. He wanted to fly to Africa; his brother was there, but Chris decided that he couldn’t really leave the farm or the airfield. “In a way, this was just as well because we had to take a lot of fuel for refuelling in the desert; all our water, our entire emergency rations. They took up the whole of the back of the aeroplane.”

The trip took them along Kitchener’s Railway and the Nile. Diana had her camera confiscated by officials after snapping some photos of the Aswan High Dam, which was under construction. However, in her typically rebellious fashion, she got someone to take her up for another flight over the site and took some more photos from a camera hidden under her jumper whilst the pilot was not looking.

The pair faced more drama on the way home. “Coming back from Africa, leaving Tunisia for Sardinia there were gunboats underneath and they started shooting at us,” Diana recalls. “Patrick climbed out of range and fortunately none of the bullets hit the aircraft.”

Not long after returning home she started teaching her son, Jamie, to fly. Her daughter, Elizabeth, is also a keen pilot and the two have flown in America together. Jamie has now taken over the running of Headcorn.

Diana has recently published her biography?written by journalist Greer Harris?and regularly gives talks. She donates her fees to the Blond McIndoe Research Foundation, which carries out research into treating burns and other traumatic injuries. It was named after the plastic surgeon famed for treating WWII aircrews, for whose patients Diana has raised funds throughout her life.

“I still fly occasionally,” says Diana, “hopefully I’ll go up with my son more when things get a bit less hectic on the airfield and farm. I’m hoping that my granddaughter, Alice, will get her licence shortly when she’s seventeen, and I want to be flown by her. If I’m still around when Emily reaches that age I’d like to go up with her as well. That’s my wish.”

These days Diana raises money for the Blond McIndoe Research Foundation through giving talks on how she started Headcorn Aerodrome, and her trip to Egypt. Contact tel: 01424 812479

Did you enjoy this article? Read more on women and aviation here: