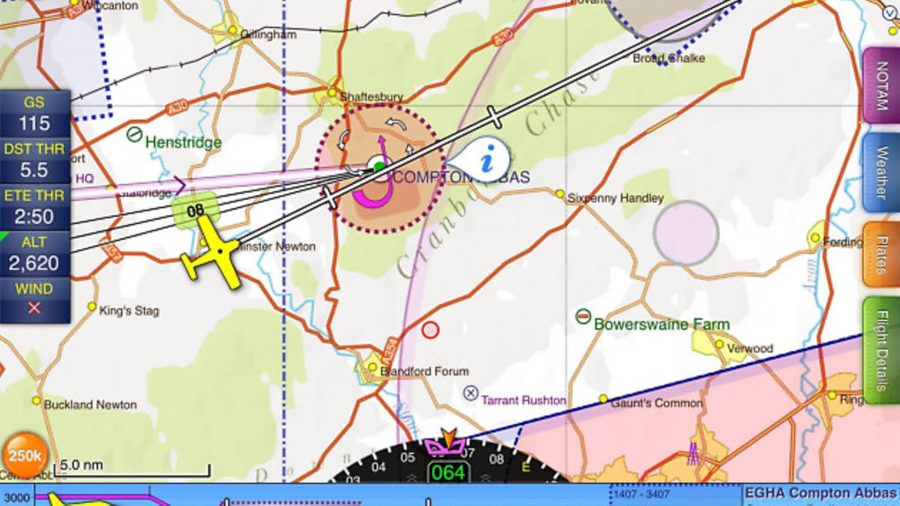 SkyDemon has invented a new instrument for version 3.4 of its leading navigation app, which is designed to give the user information about the airfield and runway that they might need without having to ask. It’s called the Airfield Brief.

SkyDemon has invented a new instrument for version 3.4 of its leading navigation app, which is designed to give the user information about the airfield and runway that they might need without having to ask. It’s called the Airfield Brief.

The Airfield Brief appears at the bottom-right of the screen when SkyDemon is in navigation mode, whether you are either sitting on the ground at an airfield or in flight and getting close to your destination. At a glance, it gives you the frequency to call, for example – and the identifier, length and surface of the selected runway are clearly displayed along with information about availability of fuel.

‘We also wanted to help reduce the risk of loss of orientation when approaching an unfamiliar airfield,’ the company says in its latest newsletter. ‘With lots of things to do, we all know that sometimes it can be tricky instantly appreciating where the circuit lies compared to the direction you’re approaching from. When the Airfield Brief instrument is onscreen you can touch it to quickly nominate the runway you’ll be landing on (once the airfield has told you on the radio) and the circuit direction and join type. SkyDemon then draws arrows on the chart to make it obvious where the circuit lies, your path around it, and how you’ll be joining/descending.

‘This feature isn’t designed to prescribe an exact path over the ground (we may add this in the future for airfields which do enforce such exact circuits) but rather to offer you an instant appreciation of where everything is compared to you. In the latest 3.4.2 version we have further improved the Airfield Brief to alert you when the runway you have selected for approach (or are about to take off from) has been affected by a NOTAM. For example it may have been closed altogether due to works in progress, or braking performance may be reduced.’

“The Airfield Brief has already received some very good feedback indeed,” Rob Hart tells Pilot. “For a long time we have been trying to find some new way of supporting pilots in the stressful approach phase – particularly when approaching unfamiliar airfields – and this feature is the result of that development. One of our key considerations was to not necessarily make decisions on the pilots behalf, but instead to support that pilot with quick calculations and visual cues once the approach/join decision has been made.”