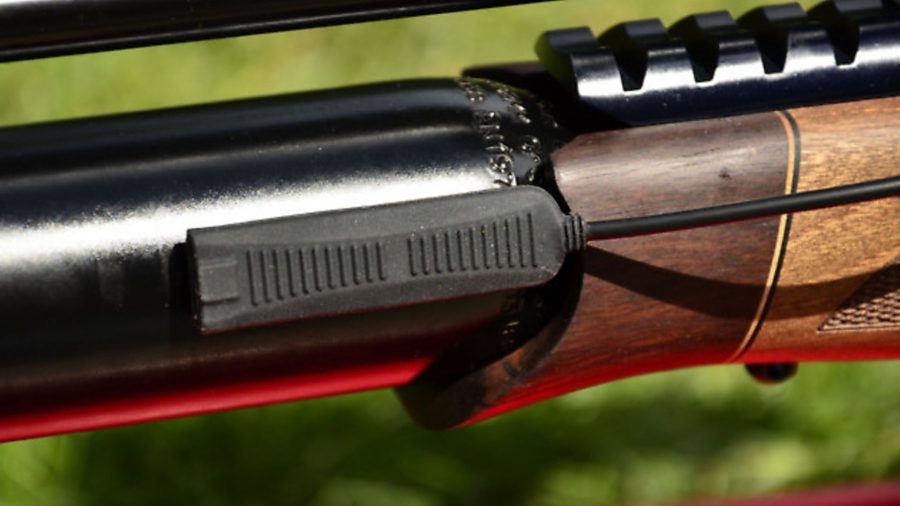 Night Master’s rise to prominence in the world of night shooting has been impressive, with some fairly hard-to-please gamekeepers I know positively ranting about the performance of the company’s largest model. The little 400 model was aimed squarely at the airgun market which it serves very well, but some folks either want or need a bit more punch than it offers. Because of this, Night Master designed the Venom Strike that sits in the middle ground and adds some new features as well, most notably the dimmable remote switch.

As with their previous models the construction feels chunky and solid as if it will take a beating in the field, and let’s face it, lamping gear does so often get knocked about. At around 8” (20cm) it’s a fair bit bigger than the 400 but way smaller than the 800 and all that metal does add weight, but it’s a price worth paying.

Like the other models, the beam’s output is square. I’ve never decided is that’s good or bad for me; it’s just a feature of this range. The beam is focusable so I set it for about 30 yards when I was out rabbiting but brought it right down to 10 yards while walking around the yard. I also appreciated the dimmer in the yard. At full blast it was too bright up close, but out in the stubble I enjoyed the extra searching range the extra power offered.

You can swap the lamp modules from white to red, green or even infra-red to act as an illuminator for night vision devices, which makes it highly versatile. In fact it’s a modular system allowing you to custom build one to suit a particular role or swap jobs, by exchanging parts as and when they’re needed. I love the idea that one lamp/torch can cover so many if not all my night shooting needs.

My friends’ experiences tell me that these are tough lamps, evidenced by the scrapes scratches and dents their units wear with pride. Power is supplied by two CR123A lithium batteries, which are the industry standard for ultra-high performance lamps, or one 18650 battery. I’d prefer to use the larger 18650 rechargable units which are much kinder to your bank account.

The mount supplied was what I call a figure-of-eight split clamp, which takes just seconds to fit to any scope. The large thumb wheel can be tightened even with gloved hands. The dimmer control dial is also nice and chunky. I particularly liked the pad of the remote switch. It’s a proper ‘on and off’ one, rather than a ‘momentary’ one that requires you to maintain pressure to keep the lamp lit, something I find hard to do. Decades of training myself to grip the rifle as little as possible runs contrary to pressing a switch hard as I release a shot.

Although not cheap, I can see this system being another big hit for Night Master and it’s one I’d be happy to take to the field. n