ILAFFT: The importance of Plan B in minimal visibility

Is that the coast ahead or cloud? Plan B trumps get-home-itis but only if you made one earlier… | Words by: Martin Parry

I had been looking forward to this trip for a fortnight. My good friend and flying partner had to make a business trip to Guernsey with two colleagues: how about we fly there for the day?

I was free on the appointed day but had a work trip myself to Copenhagen the next day. As a member of the London Symphony Orchestra, being at Stansted the next morning for the orchestra's flight was non-negotiable but we agreed that, subject to good weather, the trip was on. We had recently been checked out on a very nice C182 - an ideal aircraft for this trip.

The forecast the day before was excellent; CAVOK, light winds but with rain and cloud affecting the eastern UK by late evening. We intended to be back at six-ish so that should be no problem.

At the strip near Cambridge at 0800 the weather was perfect, clear blue skies and the promise of a lovely warm September day. 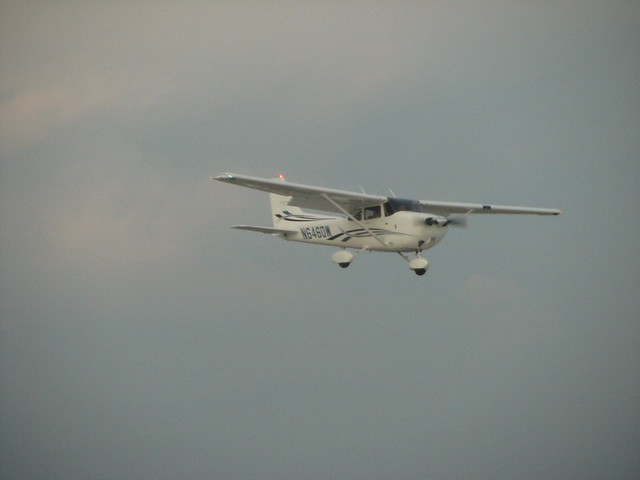 When flying together we had developed a procedure of P1 flying with P2 navigating and making all radio calls. It's more interesting for whoever is in the right-hand seat−and definitely made a difference later that day. We still fly the same way today.

As Rupert lifted off I called Luton for a zone transit and concentrated on ensuring we were on track: this was pre-GPS. Soon we were coasting out over the Channel at Southampton and 1hr 35min after takeoff we were on the ground at Guernsey.

I had several hours to kill. Rather than sit around doing nothing I thought that lunch on Alderney had appeal so I hopped back into the aircraft and was soon on my way.

This was the first time I had flown the 182 solo and the completion of very enjoyable and easy flights there and back added to a degree of over-confidence which contributed to what was to follow. 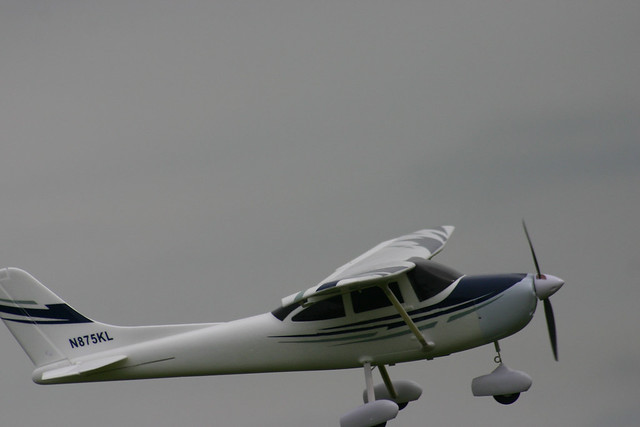 The first glitch was the late return of the others, but we were eventually on our way at 1730, just an hour late. I can't remember which one of us first commented: "A bit of cloud ahead or is that the coast?" We were aiming for mutual casual reassurance at that stage.

I soon found myself losing height, however, as there was a distinct band of cloud below our level, and by the time we reached Southampton we were down to 1,200ft.

Not to worry though, the sea crossing was behind us, and having been cleared by Southampton via their overhead we had just 35 miles to Hampstead Norris before turning right for the last fifty miles.

We continued north but the visibility was getting pretty murky and I found myself reducing height unobtrusively to remain clear of cloud. 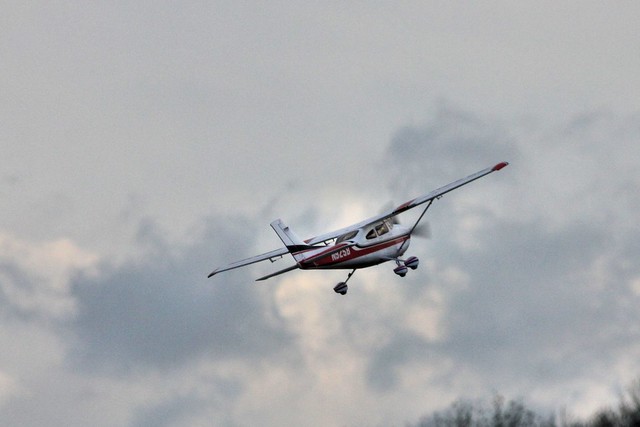 I wasn't quite so confident when we were down to 800ft at our turning point. With relief, I turned onto our final heading but suddenly the minimal visibility disappeared altogether, and with cloud swirling all around it finally dawned on us that things weren't going to plan.

Fortunately, during my biennual flight check not long before I had practised some instrument flying. I could hear the instructor's voice in my head: "No steep turns when on instruments, ten degrees max."

Gingerly I brought us round 180 and after a few moments we emerged back into the gloom. First test passed but what now?

Having been woken up from our 'press on regardless' torpor, plan B was needed. As I put us into a gentle orbit Rupert contacted Luton. 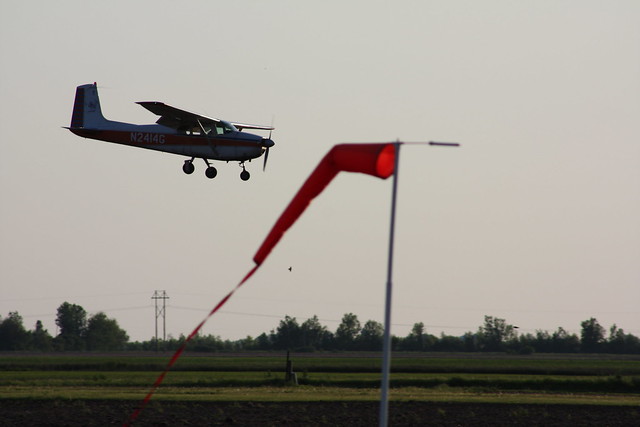 "200ft cloudbase in rain" was the reply so we were not going there. As he scoured the chart I was aware of considerable tension from our passengers.

Disguising that there was even more up front, I announced that a diversion was underway. After what seemed an eternity Rupert suddenly said "Farnborough! I wonder what it's like there." A quick call and, "500ft cloudbase 1,000 metres in rain". Better than Luton and only twenty miles away. "Let's go" I said.

Rupert's call for a diversion brought the question "Would you like an SRA or your own navigation?" Not really knowing what an SRA involved, any offer of help at this time was very welcome.

"We'd like an SRA," replied Rupert successfully keeping his voice at normal pitch. "Roger, climb to 1,900ft." What? Is the man mad? Doesn't he know what the weather is like? "Climb to 1,900ft for radar identification," he insisted. 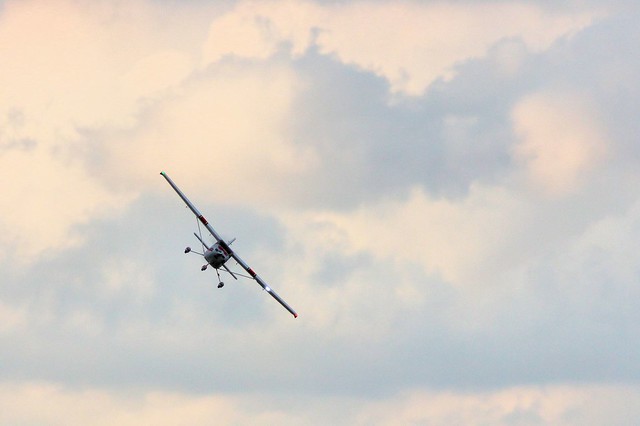 Well, at 800ft we were practically in the cloud so, cautiously pulling back on the control column and re-trimming, up we went. With my earlier practice flight in mind, I concentrated on the instruments with words of encouragement from my right.

Corrections to our heading became more frequent although it was reassuring that somebody knew exactly where we were.

Our following of his instructions seemed acceptable, but the knowledge that we were going to have to be utterly precise to get back onto the ground in one piece was overwhelming. This is where it's really going to get hard, I thought. 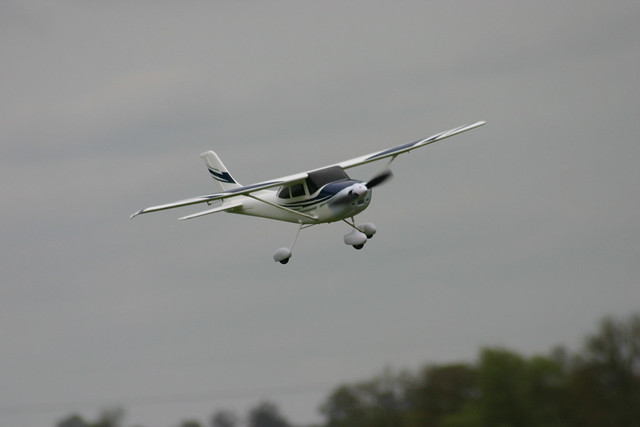 As a musician, I was used to having to do 'retakes' in a recording session if the first wasn't perfect, and knew that the second time was even harder if you had fluffed a particularly difficult passage.

Steeling myself for Take Two, Rupert suddenly cried: "Visual", his voice rising a couple of octaves. I looked up from the instruments to see lights appearing out of the gloom with a wet runway beyond. The rest was easy.

What did we learn from this? If the weather starts to look nasty ahead don't just sit there and hope for the best. Always think about plan B even if you might not need it. And although you might not plan on doing any instrument flying, take any opportunity to practice a little. 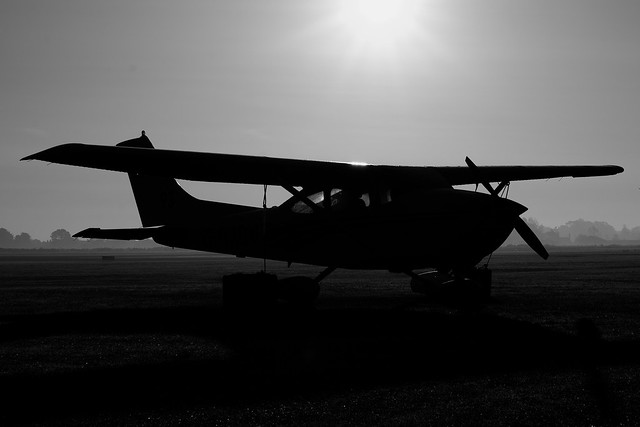 Twenty-four hours later sitting on the concert platform in Copenhagen with the rest of the orchestra as the elderly and highly esteemed Maestro brought his quavering hands down in some approximation of a downbeat we all looked away and waited for that moment of magical musical telepathy that exists in a great orchestra.

Flying blind again, I thought, but at least we're not going to kill anybody tonight.